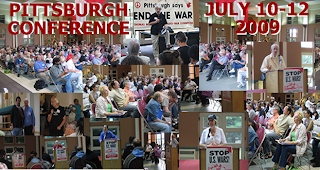 Last weekend, July 10 – 12, the National Assembly to End the Iraq and Afghanistan Wars and Occupations held its 2nd national conference. Although recently there has been a downturn in anti-war and other protest activity in the U.S., even as the conference was going on, the people of Honduras were fighting against a right-wing coup, Iranians were taking to the streets, efforts were being made to break the blockade of Gaza, and the wars in Iraq, Afghanistan and Pakistan were continuing to escalate.

The Conference was attended by more than 250 people including people from all of the major national coalitions: ANSWER, UFPJ, The World Can’t Wait, Bail and Out the People Coalition, and others. There also were members of Veterans for Peace, Iraq Veterans Against the War. Code Pink, American Friends Service Committee, Peace Action, Women’s International League for Peace and Freedom, US Labor Against the War, Pax Christi, the Iraq Moratorium, Progressive Democrats of America, the Peace and Freedom Party, the Green Party, and other national groups. People from local peace groups across the country, including Bethlehem Neighbors for Peace members Tim Herr, Trudy Quaif, and I, were present, as well. BNP set up its literature table and did brisk business throughout the weekend.

The conference was held at LaRoche College in Pittsburgh and was hosted by the peace committee of the Thomas Merton Center, the main peace group in Pittsburgh. National leaders in attendance included Cindy Sheehan, Col. Ann Wright, and long time peace activist Molly Rush of the Plowshares 8, who also is a founding member of the Thomas Merton Center.

Keynotes and talks were given by Michael McPhearson, Executive Director of Veterans for Peace and Co-Chair of UFPJ, Iraqi poet and National Assembly leader Zaineb Alani, National Assembly leader and human rights attorney Lynne Stewart, Michael Zweig, an economics professor and leader of U.S. Labor Against the War, and a others. A special presentation was given by Elie Domota, the General Secretary of the General Union of Workers of Guadalupe, which recently conducted a 45-day general strike on the Island of Guadalupe, where they are fighting against French colonial domination. There were also representative of the peace and labor movements from Canada and Haiti.

All those in attendance had a voice and a vote in all proceedings of the conference.

The main plenary sessions were dedicated to 1) developing an action proposal for the coming period; 2) deciding on an structure proposal for the National Assembly, including electing an Administrative Body to lead the organization until our next conference. The National Assembly continues to aim to bring unity to the anti-war movement in the US and hopes to do this around specific actions. The action proposal, in particular, was discussed in this light.

Five action proposals were circulated to the activists who were present. One, from the National Assembly leadership, had been worked out over the prior four months. A second was withdrawn at the conference. The remaining three came from David Swanson, an author and activists and leader of the After Downing Street group; the World Can’t Wait coalition; and a group of 9/11 truth activists. All proposals were discussed and debated, and in the end, in the spirit of unity, all of the resolutions, with the exception of the proposal from the 9/11 truth activists, were consolidated into a unified action proposal. That proposal calls for building a series of actions in the fall and holding a national action next spring around the anniversary of the invasion of Iraq. The fall actions will take place on two dates: the first is September 24-25, when the G-20 summit will be held in Pittsburgh, and the second is October 17, around the anniversary of the invasion of Afghanistan. The National Assembly will build the October 17th actions around the following demands:

Immediately and unconditionally withdrawal of all U.S. troops, military personnel, bases,
contractors and mercenaries from Iraq, Afghanistan and Pakistan!
End U.S. support for the Israeli occupation of Palestine! End to the siege against Gaza!
U.S. hands off Iran and North Korea!
Self-determination for all oppressed nations and peoples!
End war crimes, including torture!

In addition, the National Assembly will support and endorse a two-week period of united mass actions beginning October 3 and culminating on October 17. This includes Monday, October 5, as the date for a national mass march and non-violent civil resistance at the U.S. House of Representatives office buildings and at the White House.

This is an ambitious program of action, but there are enough people and groups committed to working on it, and every effort will be made to bring the entire anti-war movement into unified actions around these dates. The larger than expected attendance at this conference and the statements made there by leaders of the national anti-war groups suggests that we will be successful in this effort. To help build these actions, the National Assembly will sponsor a national speaking tour of one or more prominent people during the fall.

In addition to the action proposal and the structure proposal, the conference also passed resolutions on the Honduras, Palestine, and Haiti and had a discussion and debate on the situation in Iran. These resolutions, along with this report, are posted on the Northeast Peace and Justice Action Coalition web site at http://www.nepajac.org/. They also will be posted on the National Assembly web site at http://www.natassembly.org/.

The Iran discussion was friendly, although vastly differing opinions were expressed. Some felt that the anti-war movement must stand strong with the demonstrator in the streets in Iran while others believed that doing so could open the door to US or Israeli intervention. This issue could not be fully resolved at the conference, but all agreed on the importance of opposing any outside intervention in the Iranian struggle. The conference, therefore, supports the position of US hands off Iran! No Sanctions, No Intervention! Self determination for the Iranian people!

Finally, the conference elected a 14 member Administrative Body. The fourteen members are:

There were also a series of workshops at the conference on issues including the economy, Iran, Women and War, Students and many more. At the G-20 workshop, some of the first organizing for the G-20 demonstrations in Pitssburgh took place. An important workshop for our area that I attended was called Torture, Renditions, Detentions, Guantanamo and Wrongful Prosecutions: Holding Those Who Give the Orders Accountable. This workshop discussed many of the cases of Muslims who have been unjustly targeted which we in this area have been involved in. The workshop included Lynne Stewart; Jules Lobel, law professor University of Pittsburgh, author "Less Safe, Less Free," U.S. Center for Constitutional Rights litigator; Janet McMahon, Manging Editor, Washington Report on Middle East Affairs; David Swanson, confounder After Downing Street and Katherine Huges from the Dr. Dhafir Defense committee in Syracuse. The workshop was very well attended.

I would like to have a NEPAJAC meeting in the near future to start discussions among all peace and justice groups in the Capital District of the actions planned for this fall. Although it is now the summer and anti-war activity is at a low point, the issues that brought us together in this struggle have not gone away. There is an escalation of the wars at a time of economic crisis that that is deeper than most of us have ever seen before. We have celebrated the end of the Bush era. It is now time to get back out in the streets.