Thoughts on the Events in Iran 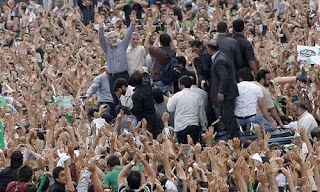 The elections as a whole were not democratic. The Mullahs, the Guardian Council, decided who can run and who couldn’t; this excluded most people who wanted to run. Those who were allowed to run were all people who the Mullahs could support. Mousavi is not much of a radical or moderate and not someone deserving of our support.

Although the elections in Iran were rigged from the start, the Iranian system is more democratic than in other countries that the US does support such as Egypt or Saudi Arabia.

Although the Iranian elections were rigged, I think there is mass support for Ahmadinejad. I think he probably won the election. This is not like the case in Mexico in 2006 where Calderon was declared the winner but most observers felt that Obrador won. In the Mexican case there were huge demonstrations for a long period of time but they were not looked at favorably by the US government or the US media unlike the Iranian demonstrations that are looked at favorably by both. In the case of Mexico, the opposition was deserving of our support.

This is also unlike the Orange Revolution in the Ukraine. There, the 2 candidates got about equal vote in the election but the US had a lot of influence in that country and was interested in furthering the break-up of the Soviet Union. The US played a crucial role in the Ukraine organizing demonstrations for the pro-western candidate and financing the opposition. As a result, today, the Ukraine is pro-US imperialism and supports the US wars in Iraq and Afghanistan and the US is pushing to have them join NATO. In the Ukraine I think it would have been better for the Pro-US candidate to lose.

In Iran, neither candidate is pro-US. In fact, Mousavi, who was the prime-minister in Iran during the 1980s, has been one of the biggest advocates for pushing Iran’s nuclear program. I don’t believe that the US wants to see him in any more than Ahmadinejad. Also, the US does not have the same influence in Iran as it had in the Ukraine. The US cannot direct the mobilizations as it did in the Ukraine. I think this is why the US response has been muted, unlike in the Ukrainian situation.

Also, I think that the US assessment of the situation in Iran is that Mousavi will not be put in office and will not win this round with Ahmadinajad. So, by giving him support, they will not gain. All the US can hope for in Iran is to use it for propaganda value to build more support for invasion.


The main point about the US and the Iranian situation is that the US government would love an excuse to invade Iran. We, in the US, must build opposition to any moves to invade. This is one of the reasons that it is important to maintain a strong anti-war movement in the US. War will continue to be an ever-present part of US foreign police.

I think it is important for us to point out the hypocrisy of the US in this situation. It was the US government who overthrew the democratically elected, secular Mossadegh government in Iran and installed the brutal Shah in power. When the Iranian people went out into the streets and overthrew the Shah, his forces shot them down by the thousands but we saw no outcry from the US politicians or the media.

So, I think the position of the US left should not be in support of the Ahmadinejad regime because they “won the elections,” or because they will be more anti-imperialist than Mousavi. I think neither is true. The elections were not democratic from the start, and Mousavi will stand up for the theocracy and against the US to the same extent as Ahmadinejad – and maybe as a better representative for them than Ahmadinejad. And the theocracy running the country makes Iran a not so good anti-imperialist power in any case. Eventually the Iranian people will need to overthrow the theocracy, but that is not the fight going on in Iran today regardless of the fact that many in the streets want to overthrow them.

Similarly, I don’t think that the left should support the opposition because it will not lead to change for the Iranian people and it will be wrong to imply that it will.

That said, I think that many people in Iran who are opposed to the repression in Iran have been drawn into the demonstrations. It is always possible that people in motion can take a situation further than it was intended to go. I think it is important to watch this process in Iran as it develops.