How to Fix the New York State Budget 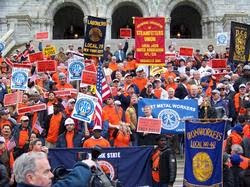 The following is a letter that appeared in the Albany Times Union newspaper with the exception of the last paragraph on war spending; this they cut. All solutions that are being project by the media and the politicians to fix the state budget are solutions that fall on the backs of working people and the poor such as tuition increases at the State Universities, layoffs of state workers or asking them for give backs or decreasing the amount of school aid. This letter takes a different approach

In the April 1 article “Paterson warns of ‘massive’ state layoffs,” the governor is reported as proposing delaying the 4 percent raise due to state workers. Once again working people are asked to assume the entire burden of a financial crisis that we had no hand in creating. In reality, there is no budget crisis; we are the richest country in the world and can afford a bigger share of the pie for the working people and the poor.

Why not ask the rich to assume a fairer share of the burden? Over the past years, tax rates have been significantly flattened in favor of the rich so they pay a New York State tax rate not that much different than the poorest New Yorkers. Let’s tax the rich.


While an Albany resident pays 8% tax when they buy a shirt, the less than 1% tax on a stock trade is completely rebated to the payer. Let’s tax stock trades.
According to a Government Accountability Office study, 2/3 of corporate taxes are not paid as Corporations seek tax shelters and other gimmicks to avoid paying taxes. Let’s tax the greedy corporations.

While our state claims a budget deficit of 13 to 18 billion dollars, our state’s share for the illegal and immoral wars in Iraq and Afghanistan is over $87 billion. Let’s end the wars.

Anyone of these alternatives can save our schools, save our jobs and save our state, but it seems that all options that don’t put the entire burden on working people and the poor are off the table

Tax on stock trades is rebated to the payer: http://www.ibo.nyc.ny.us/iboreports/stocktransfertax.pdf
Posted by Joe Lombardo at 12:48 PM