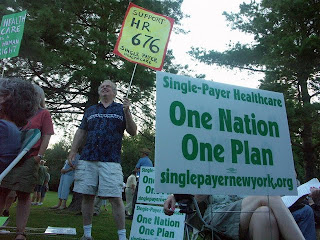 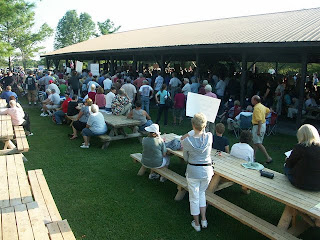 In the Capital District we have had a series of congressional town meetings like those in other areas; however, in our case, the right-wing has not been allowed the upper hand and hasn't been successful in disrupting the meetings. At the two town hall meetings that I attended, progressives have outnumbered the right-wing and prevented them from shouting down single-payer or government option opinions.

The left needs to take stock of what is going on at these meetings and insure that they are not disrupted by these modern day Brown Shirts. There are fewer and fewer places for public debate in this country, as the media becomes more and more tightly controlled and as public spaces give way to privately owned malls. So, when congress members come back to their districts to hold town hall meetings to hear what their constituents think, we should use them to make our progressive voices heard and not allow them to be taken over by the right-wing.

These right-wingers must be confused and demoralized when they find themselves outnumbered at these meetings. If their primary news sources are FOX News and the fascist minded talk show hosts, they must not understand a forum where opposing voices are allowed to be heard and where the propaganda that they hear gets challenged. The right-wing talk show hosts use the technique of talking over opinions that they don’t want you to hear, and so their listeners try to do the same thing at these health care reform meetings. But when we outnumber them, they can't get away with this.

Additionally, some who come from the Ron Paul or Libertarian perspective agree with us on many issues like the ending the wars and occupations or opposing the bank bailouts. They typically support gay rights and the right to abortion. Others are against any government healthcare option or single-payer because they believe that they will pay for abortions. We should exploit these differences, divide them from each other and even make common cause with some where we can.

Can Government Do Anything Right?

Although there are many issues that bring right-wingers to these town hall meetings with obvious anger and passion, when you cut away the lies and misinformation, the main issue is mistrust of government. Some of this is justified; there is reasonable anger from both the right and the left over the bank bailouts and the welfare for the rich, for example. However, when this criticism comes from the right, it takes the form of scapegoating. Many of the right-wingers that I see at these meetings look like they are not well off. One man told me that it was a government lie that 50,000,000 people don’t have health care in the US. During the discussion, he admitted that he himself did not have healthcare. But he sure as hell did not want any “illegal aliens” to get it, and his unrestrained racist anger at Obama was clearly coming from the same racist position, where he believed people whom he considered beneath him were getting ahead of him. It is this same racism, along with anti-Semitism and sexism and homophobia that has always fueled right-wing movements.

The difference between the right-wing and left-wing positions on the failures of our government is this: the right insists that the government do nothing, while the left demands that the government does what it is supposed to do: provide for human needs that the people cannot do for themselves, like building the roads and bridges, organizing fire departments, running schools, and making sure that we all have healthcare.

While the local meetings are forcing progressives to mobilize in response to the right-wing mobilizations, and while we support the kind of participatory democracy that these meetings may represent, there are downsides to these meetings too. They have shifted the health care debate to the right. There are many who support a single-payer option but feel a need to defend the public option because that is the brunt of the attack from the insurance companies and the Republicans. So the debate has become the status quo verses the public option, and single-payer has become marginalized. However, at the meetings I attended, if there had been a vote on what the people wanted, I'm pretty sure that single-payer would have won. Because of this, those of us who support single-payer must be bold in expressing this at these meetings and elsewhere.

Another downside of these meetings is that the centrality of the health care debate during this period has pushed other issues to the side. This is most apparent with anti-war issue; while the wars continue to escalate, our attention has been focused on healthcare. As a result, terrible decisions have been coming out of the Obama administration, with little opposition. These include escalating the wars, continuing of extraordinary renditions, continued cover-ups of war crimes, etc. The fall anti-war actions will be an important step towards moving these issues back to center stage (see www.nepajac.org.

It is important that we continue to mobilize when these types of situations arise. By doing so, at least in this area, we have been able to change the news coverage from the national perspective of mobs of people opposing any government involvement in health care to one of a public debate on healthcare. A debate on the issue will always work in our favor, since it allows us to show the superior single-payer type systems that exist in other countries.

During these mobilizations, single-payer advocates have made common cause with government option advocates in opposition to the misinformation and behavior of the right-wing. In my opinion, this is good and necessary. It would be a mistake for us to allow ourselves to be split from good folks with whom we can work on a number of issues. The divide and conquer tactic of the US government in Iraq and Afghanistan has been used very effectively. It has also been used in the US anti-war movement, where some coalitions will not even admit the existence of other peace coalitions let alone join in actions with them. We cannot let this happen to the healthcare movement. I say this even though I believe that the only viable option is the single-payer option, since a government option would still keep the insurance companies in the picture, keep health care costs high, and continue to allow abuses, which will eventually lead to a rejection of any public option and prove the right-wing's point that government can’t do anything right.

It is very important for people to understand that voting or having one's own position on an issue is not enough. It is important for people to understand that they need to act and that their actions have an effect. This is not taught by the media, the government, or the schools. We learn that democracy equals voting; then you go shopping or watch commercials on TV and let the elected officials do the work for you. As we mobilize for these town meetings, we feel our strength. We see that our mobilization is able to change the character of these meeting. Although we don’t have the money or control that the insurance companies and other private corporations have, and we don’t have the lobbying power or money to make the large campaign contributions, the power of a united people is the greatest power of all. Just by putting our hands in our pockets and refusing to cooperate, we can bring the country to a standstill. So as people start demanding to take the profit out of healthcare and see resistance from the government and the corporations, we become a little more conscious of the fact that we are not on the same side and that they are not working for our benefit. It brings us a little closer to understanding that if we are to make the basic changes that we need, the only thing we can rely on is our own collective, organized strength.

A single-payer system is what we need to fight for now. It is the demand that addresses the concerns of the American people, including rising medical costs, rising unemployment, and increasingly unscrupulous practices of the insurance companies during this period of neo-liberalism. However, what single-payer does is replace the insurance industry with the government. Despite the rhetoric of the right-wing, it is not socialized medicine. The hospitals and the pharmaceutical companies and other health care services will still remain private, for-profit organizations. These institutions will continue to put profit over the needs of people. This will remain an obstacle to providing quality healthcare, even with a single-payer system. During this debate, we should point out that the right-wing claims that a public option or single-payer system is socialized medicine are wrong and use the debate to talk about what a real socialize system would look like and tie it into the devastating effects that private industry has had in all areas from Enron to the bank bailouts.