Protests on the 6th Anniversary of the Iraq Invasion 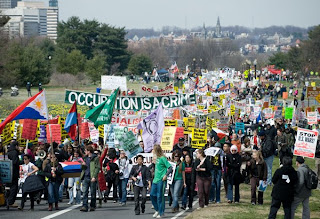 The March 21 anti-war rally in Washington was an important success, but smaller than past rallies. It was very important that it happened because if not, there would have been no national action on the 6th anniversary of the war in Iraq in the country that is responsible for the war, the US. Actions also took place in San Francisco and Los Angeles as well as several other places. Other important features of the march were the diversity and youthfulness of the demonstrators.

We had a bus from Albany. There were also a few from Albany who could not get on our bus and went with a bus from Kingston, some left from the Yankee Trails bus barn in East Greenbush. Other area buses that I am aware of are 2 from Rochester, 1 from Ithaca, 1 from Syracuse and 3 from Hartford. Our bus included a number of students from SUNY, Siena and Bethlehem High School. About half of our bus was students. A number of others from our area came down by their own means and I saw several at the rally.

The march was very long and took us past a number of corporate war profiteers where we left coffins to show the effects of their work.

At the demonstrations there were provocations, ostensibly organized by anarchists. Below is a quote from a report by Jerry Gordon, a central leader of the National Assembly, based upon a discussion with Brian Becker, a leader of the ANSWER coalition.

“In D.C., San Francisco and Los Angeles, there were planned provocations ostensibly conducted by anarchists but actually the work of police agents and the Feds. In D.C. this group put up a mesh fence which prevented marchers from passing without doing a detour around the obstruction. Those participating in the provocation yelled out slogans denouncing and redbaiting ANSWER and other forces as racists. But when the march reached the corporate headquarters of one of the big plane manufacturers, five of the "anarchists" showed their police credentials and were admitted into the building. Pictures of this were taken by demonstrators and when this was discovered, a frantic but unsuccessful effort was made by the cops to seize the pictures. In the course of this, a cop had a gun pointed only inches from Brian's face. ANSWER has the pictures and will launch an initiative to pull together a coalition of civil liberty groups to cope with and expose an evolving trend of federal law enforcement and local police activity designed to disrupt peaceful antiwar demonstrations”

Besides the importance of the national peace movement demonstrating on the 6th anniversary of the war, I believe that building the demonstration was essential for the peace movement. It was difficult to build the rally even though sentiment in this country against the wars has never been greater. People organizing the rally nationally like ANSWER and the National Assembly, which I was working with, understood that the rally would be smaller because of the political period that we are in. Obama is still in his honeymoon period with the American people who are convinced, in their majority, that he is ending the war in Iraq. There also appears to be less violence in Iraq. The government and media attribute this to the surge; however, most observers in the peace movement understand that it has to due with other factors including the success of US government’s tactic of divide and rule. This has manifested itself in Iraq through outright bribery of Sunni leaders outside of Baghdad and ethnic cleansing in Baghdad. The ethnic cleansing has reduced the population of Baghdad from roughly 50% Sunni to 10% Sunni. It has caused millions of refugees and thousands of deaths. Additionally, I think other factors contributed to the size of the rally including the economic meltdown which has dominated the media and the thinking of the American people. Also, as you know, the divisions in the anti-war movement have had an effect as UFPJ moves away from the issue of the wars and the bitter split between ANSWER and UFPJ continues. It will take some time for these factors to play out.

If there was no national demonstration on the anniversary of the invasion of Iraq, the anti-war movement would become invisible. It would go into retreat and have to be rebuilt at a future date. As it stands now, the organizing for this demonstration has kept the issues in front of the American people and helped build a new young leadership for our movement that is beginning to step forward. In July, the National Assembly will hold its second nation conference. All national and local anti-war groups will be invited. As with the first conference anyone who comes will have voice and vote. Here we hope to assess where the anti-war movement is and how to move forward. If you are interested in coming to this conference in Pittsburg, please let me know.