Report on the National Peace Conference 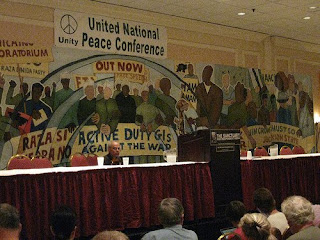 Below is a report I sent to the various Albany, NY area listservs on the United National Antiwar Conference that took place in Albany on July 23 - 25.

The United National Peace Conference in Albany brought together people from around the country and overseas. Although two people from India were denied visas to come to the conference, 520 pre-registered and 256 additional people registered at the door, for a total of 776 participants.

The Sanctuary for Independent Media provided live-streaming of major segments of the conference to the Internet, provided a place for people to upload pictures and tweets and posted major presentations on Youtube. The day after the conference, the Youtube videos got over 17,000 hits, making them the most viewed videos from a non-profit organization for that day. This enabled thousands who could not physically make it to the conference to nonetheless experience it.

The core leaders of the anti-war movement were all there, including Media Benjamin, Col. Ann Wright, Kathy Kelly, Dahlia Wasfi, Michael McPherson from UFPJ and VFP, Kevin Martin from Peace Action, Blasé Bonpane, Mark Johnson from Fellowship of Reconciliation, Glen Ford from Black Agenda Report and Black is Back, Kevin Zeese, Fahima Vorgetts, Mike Ferner, Michael Eisencher from US Labor Against the War, Larry Holmes from the International Action Center, Nada Khader, Debra Sweet, Leila Zand, and others. Cindy Sheehan also came but had to leave immediately when her daughter went into labor back in California. Additionally, Ethan McCord, a former soldier on the ground in Iraq who was seen on the first leaked Wikileaks video, spoke out publicly for the first time. War resisters, GIs who have refused to deploy, skyped into the conference from Canada, since they could not be there in person.

Noam Chomsky spoke Saturday morning via video. Following by another keynote address given by Donna Dewitt, President of the South Carolina AFL-CIO, and leading member or the National Assembly and US Labor Against the War. We listened to Mumia Abu-Jamal’s audio taped message to the conference from death row and to the narration of Imam Aref’s, one of the wrongly prosecuted Muslims from Albany from his prison cell. Ralph Poynter, husband of imprisoned civil rights attorney Lynne Stewart, read her message to those assembled. Lynne was a member of the administrative body of the National Assembly to End US Wars and Occupations, the group that had initiated the conference. She was also a founding member of Project Salam, one of the other 31 co-sponsoring groups.

During panels held on Friday night and Saturday, movement leaders discussed the future direction of the anti-war movement. Throughout the weekend, the backdrop to the stage and podium was a beautiful 40 foot mural painted by Mike Alewitz and Jerry Butler, who teach art at Central Connecticut State University. Mike was an anti-war leader at Kent State University 40 years ago, during the period when National Guardsmen killed four student anti-war protestors. Jerry was at Jackson State when, 10 days later, police shot and killed students on that campus.

The conference presented thirty-three workshops on topics related to war and social justice. Presenters came from a range of perspectives, faith-based peace groups, immigrant’s rights advocates, the Palestinian rights movement, the labor movement, active duty GIs and veteran’s movements, and many more. The workshops and presenters are listed on the conference web site (http://www.nationalpeaceconference.org).

The conference operated democratically, with every person in attendance having a voice and a vote. Out of this process came an Action Proposal and a set of resolutions. All of this material will be posted in the near future on the national peace conference web site (www.nationalpeaceconference.org). Basically, the Action Proposal calls for local actions in the fall and bi-coastal demonstrations in New York City and California in the spring. The spring actions will be accompanied by separate and distinct non-violent civil disobedience actions. The proposal also calls for support of and collaboration in building the mobilizations being called by the labor and civil rights movements in the coming months. These include demonstration planned for Washington and Detroit on August 28 and a large October 2nd demonstration being organized by SEIU/1199, AFL-CIO, the NAACP, and others. The action proposal includes a strong stand in support of Palestinian rights and against the threats directed at Iran. It calls for coordinated teach-ins, lobbying efforts, and campaigns to pass city, town, and village resolutions on the issue of war spending and its impacts on the economy.

One theme running throughout the conference was the connection between the anti-war movement and the Muslim solidarity movement. Both the wars and the attacks on Muslims are the products of Washington’s phony war on terror. The wars have been called preemptive wars, and the prosecutions of Muslims have been labeled preemptive prosecution. These concepts are used by the government as theoretical justifications for the wars going on at home and abroad. The Muslim solidarity issue was highlighted at a poignant and symbolic march from the peace conference to the Masjid-Al Salam mosque on Central Avenue where the imprisoned Albany Muslims used to worship. At the Mosque, a rally was held where family member and supporters of the wrongly prosecuted Muslims spoke along with leaders of the anti-war movement such as Kathy Kelly, Medea Benjamin and Sara Flounders of the International Action Center. Also, on Saturday, a lunch time presentation was given by Shamshad Ahmad, the president of the mosque. A statement was read by Imam Aref, the former Imam of the Mosque, now in prison for 15 years

Why Albany? Some people have asked why the conference took place in Albany. My answer is that it could not have happened any where else. On the national level, the peace movement has been weak and unable to capitalize on the fact that the majority opposes the wars and the fact that trillions is being spent on war as education, healthcare and other human needs are being cut. Consequently, the National Assembly to End US Wars and Occupations decided to forgo its own national conference in favor of building a unity conference of the entire anti-war movement, understanding that the lack of unity in the US anti-war movement has been a major factor in the weakness of our movement. The Albany area has a strong peace movement in which all of the groups work together. In addition, when Muslims were attacked in our community, the peace movement and eventually the media and large sections of the non-Muslim community stood behind them. In many other areas of the country, this didn’t happen, as some peace groups felt that being associated with the unjustly prosecuted Muslims might alienate them from the politicians and others in the non-Muslim community. But what people in Albany realized is that the wars and the pre-emptive prosecutions of Muslims are two of the faces of the same phony war on terror. So as we took up the fight against the attacks on Muslims and the racism these attacks have engendered, we undercut the war on terror justification for the wars of occupation while, at the same time, finding new allies in the struggle for peace. Building bridges between the Muslim and the non-Muslim communities is exactly the opposite of what the government wanted, with its use of agent provocateurs and fabricated terror plots,

The conference was the right thing to do at the right time; it came to a close literally hours before the explosive Afghan War Diaries were published by Wikileaks and right before Congress voted for additional funding for the perpetual U.S. wars and occupations. The conference gave our movement a powerful voice at a very critical time. It also succeeded in bringing together thirty-one peace groups with diverse perspectives. We brought together the peace movement with leaders of other movements that have mobilized millions in their own right. In doing so, we took a step forward not only for peace but also for human rights and justice in general.

There also were some shortcomings. Outside of some alternative media, the conference was not covered by the national media, in stark contrast to the coverage of the Tea Party convention which, despite having fewer in attendance, was given prime time live coverage by CNN and other outlets. Maureen Aumand who, along with Mary Finneran, organized the media in Albany alerted the New York Times to the conference on several occasions. The Times tried to explain to her why they would not cover the conference, but the real reason it wasn’t covered is because the powers running the corporate media in the US want to build a right-wing, not a progressive, left-wing movement.

In addition, our audience was mostly older and white. Although polls show anti-war sentiment being greatest among youth and African Americans, we haven’t seen a lot of participation in the anti-war movement from these groups, and this was reflected at the conference, as well.

Finally, there were some tests of our unity at the conference, the most significant one being around the issue of Palestine. Important leaders of the Palestinian movement were in attendance, and a caucus was formed by Palestinian rights activists to discuss how best to integrate the Palestinian issues with the broader peace issues. They put together a resolution and an amendment to the Action Proposal on Palestine, which passed by a large majority. However, some felt that the wording was too strong and therefore fought to change it. This was a serious disagreement, and my hope is that it will not cause any deterioration in our unity.

Pulling together a unity conference with thirty-one different groups, each with its own perspective on how to bring about peace, was a real achievement. However, our true test will be in how united we remain as we build future actions to end the wars. Towards this end, the conference passed a proposal for a continuations committee that will be chaired by Jerry Gordon. It will meet for the first time on August 16th, with the goal of continuing our work and broadening it to include other forces at the local and regional levels.

The peace conference came together at just the right time and place. It happened at the same time when other progressive forces (like the labor and civil rights movements) also are mobilizing (on August 28 and October 2). The labor and civil rights leaders who have called these actions may see them in the context of the mid-term election but they come at a time that millions are being victimized by the wars at home and abroad and are looking for a way to fight back. The unity we attained with the conference was significant. If we can continue and broaden this unity with our allies within and outside of the peace movement we can change the world.
Posted by Joe Lombardo at 10:03 AM